We are yet another day closer to the festive season and if you still haven't got a present for that fantasy freak in your family or if  you will really need a solid universe to escape to, this one's for you! 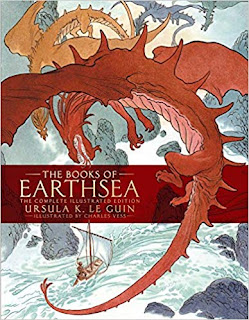 The Books Of Earthsea: The Complete Illustrated Edition
Marc says: The tales of Earthsea, beginning with the 1968 novel "A Wizard Of Earthsea" and

The series was originally started as fantasy for "older kids" (the "young adult" genre had not yet been invented), but it offers read- and reread-ability for people of all ages. I was given the first book for Christmas in a hectic year after I had (supposedly) reached adult age. I can still remember the serenity of reading it over the holidays. The world of Earthsea is not always a calm one, but the books lead through it at a measured pace, with time to enjoy the scenery and get to know the magical and mystical, yet always thoroughly relatable, characters. One of Le Guin's great strengths was the way she evoked pictures and moods with perfectly set words. Anyone who has ever read this series has been to places denied those who have not, places that seem as real as any you can remember from your childhood.

Reading through the whole saga also offers a fascinating view on Le Guin's growth as a writer and thinker. The erosion, and eventual obliteration, of genre tropes through the course of the books, while not the main point of their attraction, is foundational for much of the pioneering work done in fantasy even today.

And I haven't even gotten to the main attraction of why you may want to give away (and own) this particular collection, which is of course the work of Charles Vess. Vess has been a luminary in the field of fantasy illustrations for many decades. For this volume, he took over four years to research, explore and discuss the look of Earthsea with Le Guin. You can find some of their correspondence online, where they discuss at some length whether a certain house would have a stone roof or one of thatch. This unhurried mode of work, so in line with the world itself, has produced a masterful result. Earthsea in this book does not look like I had imagined it, and it doesn't look better than I imagined it (because how could it?), but it looks and feels exactly right, because it was crafted to look the way Le Guin imagined it. The book is not stuffed full with pictures (there are about 50 illustrations in total), but those that are there add perfectly to the mood and make reading Earthsea an even more beautiful experience.
concluding forty years later in this volume with the (previously unpublished) short story "Firelight", are undoubtedly amongst the most renowned and influential works of fantasy. The story of a young lad going to wizard school had often been copied (to great financial success, in some cases) but you would be hard put to find anyone seriously arguing that Le Guin's original was ever surpassed.
Posted by inci at 10:02 AM