The last newsletter in June predicted a quiet summer, and it was in fact a quiet summer at the Otherland to the extent that we could even afford to skip the July edition/or make a joint Newsletter Summer-Edition -which is finally ready!
So what’s coming up in September? If you’re one of the people who think that Tobias Meißner is by far not enough present at the Otherland, then here’s something for you to look forward to: On Thursday September 12, at 8 pm our favorite Berlin sf/fantasy/horror author will be at your favorite Berlin bookshop for a reading of his latest: Evil Miss Universe- this event is in German!
Our usual routine remains uninterrupted: First Thursday of the month (September 5.) role-playing evening and second Friday of the month (September 13.) Otherland Speculative Fiction Book Club, where we will talk about Matt Ruff’s Lovecraft Country. This Friday, August 23rd, we'll take a look into the world of vampiric horror with Stephen King's Salem's Lot! Both events take place at the bookshop, start at 7.30 pm, admission, snacks and drinks are free for both and contributions are always welcome. It would be super if you could drop Jakob a mail in case you want to come to role-play and it would be equally great that you read the book we are discussing at the book club if you want to show up.
Also: The Hugos are being handed out in August and we have people at the WorldCon in Ireland who will tell us at the Gatherland on September 19 all about how it was! Exciting!
Enjoy our summer recommendations!

The City in the Middle of the Night by Charlie Jane Anders
titan Euro 17,95
The City in the Middle of the Night, the second novel from Charlie Jane Anders, is a propulsive sci-fi narrative that takes place on January, a world with a tidally locked, hostile climate settled by spacefaring descendants of Earth. Two characters form the crux of the story: Sophie, an inhabitant of the oppressive city of Xiosphant who’s abruptly exiled into surrounding wasteland only to befriend a native being to the planet; and Mouth, the sole survivor of a nomadic society who later becomes a member of the smugglers known as the Resourceful Couriers, hailing from the more freewheeling city of Argelo. Revolving around the object of Sophie’s affection, Bianca, the paths of the novel’s main characters eventually cross in ways both unpredictable and organic, a testament to Anders’ storytelling abilities. Plus, the author takes care with her world-building, offering up a large cast and slowly unfolding details about territory where night is arctic and the day burns. With Sophie coming of age while grappling with past burdens and befriending the species known as the Gelet, the work is appropriate for both the YA market and adult readers who want to immerse themselves in a layered, commercially ambitious page-turner.
[Clarence]

The Redemption of Time by Baoshu
tor Euro 26.99 hardcover, Euro 17,95 paperback
Fans of the "Remembrance of Earth's Past"-Trilogy, beware! The Redemption of Time brings the hall of fame of Far Eastern Science Fiction together: it was written by the new shooting star of Chinese SFF Baoshu, translated by Ken Liu, the west’s portal to Asian Science Fiction, with the blessing of Cixin Liu the Great, after starting off as mere fanfiction. Ideal conditions for the making of a best-seller...
In the aftermath of the conflict between the Trisolarians and Terrans, Tianming tells his wife AA his own (very loooong) story; cancer-stricken, he decided to end his life in the front lines of the ongoing interstellar war, when he ended up flash frozen and was launched into space where the Trisolaran First Fleet captured him and ruthlessly tortured him for years so he would collaborate with the aliens against the human race. The real deal begins after the death of AA though; a spirit visits Tianming to tell him very incredulous secrets of the universe and his crazy new mission! Don’t miss this one if you’re into the Trisolaran universe!
[İnci]

The Gospel of Loki by Joanne M. Harris
saga press Euro 18,35
The 2014 novel The Gospel of Loki by well-known British author Joanne M. Harris is part of the author’s "Rune" series of releases, with a titular character known by many as the trickster god of Norse mythology. Harris chronicles various tales spun from traditional myth all via Loki’s perspective, who wholly owns his status as a shapeshifting deity of mischief and deceit, albeit feeling misunderstood at times by his godly cohorts.
For more background details about Harris’ take on Loki, folks can visit her website.
[Clarence]


The Octoberman by Ben Aaronovitch
gollancz Euro 15,95
After being afraid that Aaronitch won’t publish any more stories like Rivers of London after Lies Sleeping, I am relieved that he blessed us with another novella. This one doesn’t feature Peter Grant, but we get an even cooler treat. A German police officer named Tobias Winter, kind of Peter’s German counterpart, solving the mystery of something rotten killing men in the Rhineland. Clearly his recent book trip inspired him, and Aaronovitch delivers his usual greatness in all its fun glory. Good for sunny days on a beach or balcony.
[Charleen]

Silver in the Wood by Emily Tesh
tor Euro 11,99
It’s all here, folks: a little book written in nice prose that will take you away for a few hours, a charming queer romance, a dark fairytale about an enchanted forest and ancient myths, lovable characters. Really enjoyable, short, recommended read!
[İnci]

Cthulhu Fhtagn! by Ross E. Lockhart (Ed.)
word horde Euro 22,91
What happens when a bunch of weirdos like Wilum H. Pugmire aka. the “Queen of Eldritch Horror” , Witch Mountain drummer Nathan Carson, ATLRetro.com blogger Anya Martin, steampunker G.D. Falksen, dark fantasist Molly Tanzer, the (when talking about Lovecraft anthologies) unavoidable Laird Barron and more names mostly associated primarily with “lazy fascist press” assemble under the direction of Maestro Lockhart? Why, they write weird stories, of course, inspired by bad old H. In nineteen weird stories each of these highly original authors show us in yet another anthology dedicated to the Great Old One their own interpretation of what Lovecraftian means. Super anthology for fans! [İnci]

The Worst is Yet to Come by SP Miskowski
journalstone Euro 15,95
A shortish, solid horror story with everything you need to pass a few quality suspenseful hours: very nice, smooth writing, convincing characters you root for, slow build up of a complex horror, a shocking end, at the bottom line one of the best “small-town horror” stories out there.
Mind that The Worst is Yet to Come is part of Miskowski’s Skillute-Cycle; an evil small town that feeds off of its corruptible citizens - bona fide Miskowski fans can rejoice while newbies can easily get acquainted with this sinister place and its horrors.
[İnci]


Sefira and Other Betrayals by John Langan
hippocampus press Euro 30,00
Finally! You have no idea to what lengths we went to in order to supply this book and finally it’s here! I love love love Langan’s writing and think it is imperative that anyone who fancies literary horror should do so too! If you haven’t read anything by him, stop - don’t lose any more time and run to the bookstore! His slow burning suspense, building up and up and up, only to hit you with full-blown, bare horror is so unique and such a wonderful experience that every horror lover should share it!
I have been waiting for his latest short story collection Sefira and Other Betrayals since last summer and grabbed it as soon as it was published, just so I could rejoice in this thrill! I was not at all disappointed. Although I think that some stories are weaker than I would have expected, it was, as usual, a feastful pleasure to read.
As the title says, all stories in this gorgeous anthology orbit more or less around the main theme of betrayal and the horror it bears. I fell in love with the titular “Sefira”, which is the first and longest story (maybe almost a novelette?) and revolves around a woman who is, in a car, driving on the highway, pursuing a very special kind of monster. I will not tell more because it is the kind of story that unfolds slowly slowly and that is the main delight of Langan’s writing which I don’t want to spoil for anyone. Let me just tell you one thing: there is one scene where protagonist enters the evil’s den and oh boy, what an overwhelming experience! As it is when you start with such a strong piece of writing, it is hard for the rest to keep up. That is only natural. But, although somewhat less sparkly, some of the other stories are also worth a mention, such as “In Paris, in the Mouth of Kronos”, which also is thematized on the gorgeous cover and “Bor Urus” that suggest that thunderstorms may well open portals to other, more scary, universes and gives the nod to The Fisherman (if you haven’t read this semi-historical story in story yet, drop whatever you’re doing and read it immediately) by bringing back the ever so creepy Dutchman’s Creek.
Langan is definitely classic material and he will surely be very soon climbing to the very top of western horror literature-mark my words.
[İnci] 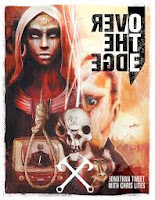 Over the Edge by Jonathan Tweet and Chris Lites
atlas games Euro 44,95
In the ultra-democratic island republic of Al Amarja, all the urban myths and conspiracy theories are true, but never in the way you’d expect them to be. The third edition of the weirdest urban fantasy role-playing game out there comes with a rules-lite system that is reminiscent of Apocalypse World/Dungeon World, but much more freeform. Its artwork is as gorgeous and idiosyncratic as its writing.So if you’re like me and you love that other weird urban fantasy rpg Unknown Armies, but feel a little intimidated by its underlying complexity, grab OTE; in terms of rules, it doesn’t get much simpler, and the setting of Al Amarja cuts it lose in a way that allows you to just drag and drop all your crazy ideas (and all the crazy ideas of people like David Lynch, Neil Gaiman or Scott Hawkins) in there and make them work for you.
[Jakob]