Do You Believe in Vampires? 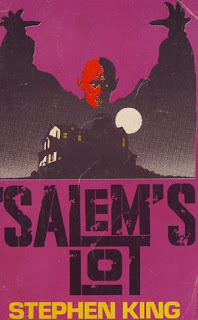 ...because a young Stephen King believed he can make you!

There ain't no such thing as a horror book club who hasn't read Stephen King (need to shake off last book club's effects immediately, yuck). SO we are on our way to become an official horror book club, when tomorrow August 23rd, at 7.30 pm at the bookshop, we will for the first time read the King's 'salem's Lot from 1975, I think his second published novel after Carrie.
He once said "Give them to me young and they're mine forever" and so it is... Most people from my generation and background would agree. He shaped above all our sense of justice, he got us hooked on reading and had a huge impact on the way we perceive literature and horror's place in it. King means a lot to me -he is one of the two authors that I started reading books with, the second one is Agatha Christie. So you can guess that I'm thrilled about our upcoming session.
Even though 'salem's Lot, the story of a writer who returns to the small town of his childhood only to witness its gradual decay in the hands of a nasty vampire, is quite far from being the perfect book, it does an original and good job in placing decadent central European-nobility-horrors in lower middleclass US suburbia of the 70s AND features one of my favorite book characters of all time: Father Callahan (you might rather know him as the charismatic vampire hunter in the "Dark Tower" books).
So bring garlic and thyme and be there tomorrow evening for our next OBC horror special, and maybe think of your favorite character or scene in this veeeery long book. See you tomorrow at the Otherland!