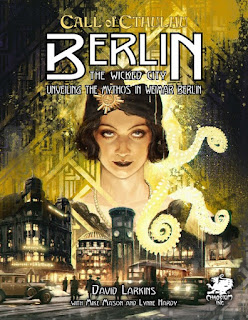 Berlin in the 1920s, a city of the arts, of theatre, of opera, of entertainment and all kinds of pleasures, but also of the working masses. Everybody who is anybody gets together here, the young go wild, it's the age of Jazz, and all the great German authors, scholars and scientists shake hands here. All the while, no one suspects the horrors lurking beneath this shrill and noisy veneer ...


Because none of them had access to Berlin - The Wicked City, the sourcebook for Chaosium's Call of Cthulhu role-playing game. This book brings you the truth about the dark cults and creatures threatening this city.
On Saturday, the 7th of September at 6.30pm we celebrate the release of The Wicked City, together with Jason Durall and Jeff Richard from Chaosium, at the Otherland bookshop in Berlin. If you're coming, you'll be among the first to get your hands on a copy. You'll also get a chance to take part in a short demo session of Call of Cthulhu and to hear a talk by Jeff about his work as creative director at Chaosium and about Lovecraft's world in books, games and other media.

The release event begins at 6.30pm at the Otherland bookshop, admission is free, and Berlin-themed cocktails will be highly affordable!
Posted by Jakob Schmidt at 1:22 PM