Otherlanders b-ware and don't forget the Final Girls Berlin, Women in SciFi Spectacular Festival this weekend!
On my last "Final Girls Berlin" experience I was impressed by and immensely enjoyed the shorts selection, so I won't be missing those this time either!
There will be a small group of Otherland book clubbers there on Saturday, so please join us! Hope to see you there, in Ladenkino! 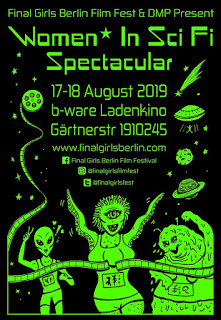 18:00 – Shorts Program 1: Otherworldly (89 mins)
The short films in this program are set in alternative realities. From the aftermaths of an ecological disaster to dealing with new types of moral dilemmas, these uncanny shorts will offer a glimpse into worlds both familiar and strange.

In this award-winning philosophical sci-fi film, a young woman (Brit Marling, The OA) who is filled with guilt and regret, learns about a parallel Earth, “Earth 2”, and wants nothing more than to leave her reality and go there.

Zoinx, a space alien, meets Jane, a timid clerk, and sparks fly. Zoinx is being tracked down by government agents, but that won‘t stop the new couple‘s love from blossoming.

10 years after a social revolution, a group of women band together and fight back against persistent social inequalities in this feminist dystopian cult classic.

In a near-future city where soaring opulence overshadows economic hardship, Gwen and her daughter Jules do all they can to hold on to their joy together, despite the instability surfacing in their world.

22:00 – Shorts Program 3: AI (83 mins)
AI is the way of the future, but there often seems to be a foreboding, ominous element attached to it. The shorts in this program delve into the compelling perks and drawbacks of this new technology.
Posted by inci german at 10:31 AM