A Much Needed Statement


I’ve been meaning to write about Kameron Hurley’s The Geek Feminist Revolution for quite some time now. It’s one of those books I devoured as soon as it came out and I’m pleased to see that it has been in the Otherland top-ten-list since last August.

“All the Birds in the Sky” – a tonal cacophony

When I picked up Charlie Jane Anders debut novel, All the Birds in the Sky, and read the synopsis, I was drawn to the idea of clashing genres. It has always struck me that there's not a ton of difference between the Death Star and the One Ring: they are both powered by plotcraft, just running on different kinds of fuel. So, I was immediately interested in the idea of fixing the fuels and seeing what happens.

In March 2016, fantasy author Peter V. Brett visited us for a reading in Berlin - actually, it was already his second reading at the Otherland. We took the opportunity to follow him with a camera as he browsed our shop and gave some reading recommendations.


Posted by Swanosaurus at 11:05 AM No comments:

On October 20th, 2016, we'll host a special role-playing game event at our shop. Jeff Richard and Jason Durall, both co-creators of the new edition of the classic fantasy rpg RuneQuest, will be there and offering RuneQuest gaming sessions in English.

Read more »
Posted by Swanosaurus at 11:35 AM No comments:

The Stars My Destination by Alfred Bester


In "Classics of Science Fiction" we will present you Science Fiction's cream of the crop; books that shaped and defined the genre and that we think every fan should have read at least once. It could also serve as a little guide for beginners.
I chose to start with Alfred Bester's The Stars My Destination because it's one of the greatest novels you will ever read. It's awesome. Trust me.

The meeting is nigh... 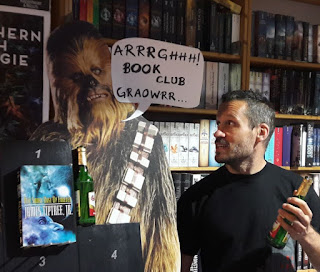 Aaah yes, the Otherland Speculative Fiction Book Club...
It's really all we ever talk about after a couple of beers.

Are you book clubbers ready? Only one week left until our next discussion: Friday October 14th is the big day (7.30 pm at the book store as usual).
Quick, finish reading Her Smoke Rose Up Forever by James Tiptree Jr.!

Oh the horror… THE HORROR!

İnci on being frightened 80's style

I grew up in an apartment complex in a country where the summers are really very very hot.
The kind of hot where the asphalt streets often melt in the city and after nights in which you feel like you can’t breathe the thick air you wake up all sticky and sweaty in the mornings.
So people either bought AC’s and got on with their lives or summer houses outside the city to spend the worst months on the cool seaside. Houses facing the beach, where swarms of kids laid on the hot sand after cooling off in the sea, played beach ball, ate ice cream, flirted with their first summer loves, played pinball in the chilly evenings, stayed up late at night… When school started you could tell who had a summer house; those kids looked so enviably tanned and happy. You had no choice but to be jealous.

We didn’t have a summer house. We stayed in our apartment until the end of August when we went to visit my grandparents who lived in another country not so hot.
So I didn’t have great, fun, happy summers at the beach but I had an older sister who liked to torture me. You know, stuff that older sisters do. She used to push the elevator’s stop button and jump around to make the cabin shake until I went into a meltdown. She often told me I was adopted and encouraged me to find my real parents and so on. It was crucial for me not to do as she wanted, not to crack. I remember often feeling like I needed to prove how brave and cool I am.
There were other kids in our street who didn’t go on vacation neither. Either because their families had to work or simply didn’t have the money to travel. We used to spend every single day together in the streets, and when it got too hot to be outside we rented videotapes (because that’s what people did back then) and watched them at someone’s home. I was the youngest one in the group, so it happened that in these summers, although very much under age, I started watching an awful lot of horror movies.
Read more »
Posted by inci at 8:27 PM No comments: