“If this movie doesn't make your skin crawl... It's on TOO TIGHT.”

Welcome back to Horror Revisited!
Holidays are almost over and you’re all mushy and still full of Yule spirit? Don’t worry, I have a movie recommendation to sort you out: a neglected gem, the first of the slasher kind – Black Christmas (1974).

Black Christmas is an unfortunately very underrated 1974 Canadian low-budget psychological horror movie directed by Bob Clark. The story is loosely based on the urban legend of “the babysitter and the man upstairs” and follows a group of sorority sisters during Christmas season, who receive creepy phone calls and are killed by a psycho-murderer who hides in their attic.
Read more »
Posted by inci at 3:03 AM No comments: 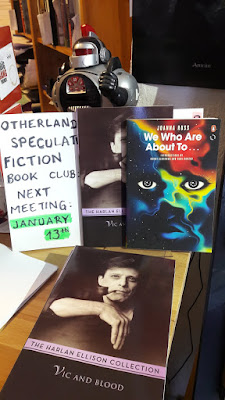 Vic and Blood in Otherland!
Posted by inci at 12:19 PM No comments:


I’ve first read Dan Simmons’ Hyperion over a decade ago and rereading it for the Classics series, I was taken aback to realize that I hadn’t forgotten a thing. Awkward… but in a good way.
It’s not like I could recite it by heart, but every name, every scene, everything about this universe was there, somewhere in my head, sleeping, waiting and it came back to me as I've reread: the Hawking drive, the mysterious captain Het Masteen, the Hegira, the seasonally burning tesla trees, the starship with a Steinway, the Shrike, Brawne Lamia’s pearl-handled pistol…
It’s not the first time I’m rereading a book, but with Hyperion it was like all of these words had been chiseled somewhere in my unconsciousness and I immediately felt the comfort of something deeply familiar. Why? What is it about them that they can have such an effect? What makes a book feel so pristine, so fundamental? Or was it just me?
I’ve decided to take a closer look at what Simmons does.

First things first though, here’s a general synopsis for those who haven’t read it yet:
The end of all times is soon and seven pilgrims are chosen by the mysterious Church of Shrike to go on a pilgrimage to the Time Tombs: a sickly young priest of the Catholic Church; a broken ex-soldier; a raucous poet; an old scholar whose infant child grows younger by the day; a detective with an unfinished business; a tormented consul and a secretive starship captain who knows far more than he admits to. In order to make sense of this dubious situation they decide to tell each other their stories.

This is the frame story of the first book of the Hyperion Cantos and before going into further detail I want to warn everybody who hasn’t read Hyperion, not to continue reading this review, for it might spoil one of the best reading experiences you’ll ever have. Seriously: Read it first and come back.
Off you go!
Read more »
Posted by inci at 10:27 PM No comments:

Here's our plan for the next three months:


As always at 07.30 pm in the Otherland Bookstore.

P.S. You can now find the dates and books for the current discussion on the sidebar!


Welcome back to Horror Revisited and to my review of the second half of the 1987 Joel Schumacher movie The Lost Boys, where the real action and good, gory stuff begins… and never ends, really. So let's take a look at it.

What happened so far? (Check out the first part of the review)
The Emersons (Lucy, Michael and Sam) move to Santa Carla, the worldwide vampire hub, and through a nasty trick on the vampires’ part, Michael becomes one of them. Warned by Edgar and Allan Frog, who are vampire hunters disguised as comic book sellers, Sam is horrified and alarmed by Michael becoming a vampire, but is determined to help him. The night it turns out that Michael is a vampire is a traumatic one for everyone involved and we’ll pick up from there:


Everybody loves Lovecraft. In fact, that would make a great sitcom idea! The wacky antics of a misanthropic Lovecraft as he tries to make it as a pulpfiction writer in New York. I’d watch it.
Actually, everybody doesn’t love Lovecraft; as we enter an age of increased tolerance, Lovecraft’s long diatribes about racial purity and how these ideas find their way into his fiction – Shadow over Innsmouth, or The Horror at Redhook – have polarized the community. But lots of people still read Lovecraft and his creations continue to worm into pulp culture. But Lovecraft didn’t write alone; despite being a very strange human being, Lovecraft was very social and gathered a wide circle of writers around him: Robert E. Howard, Frank Belknap Long, et al. Lovecraft encouraged his friends to reuse ideas from his works, and they all worked together to create the Cthulhu Mythos, developing a kind of shared universe for their creations. I’d like to introduce you to one of the overlooked members of the Cthulhu Mythos Circle: Clark Ashton Smith.

For slow readers:
In January we'll be discussing TWO books:
- Vic and Blood by Harlan Ellison
- We Who Are About To... by Joanna Russ

OBC-sets including both books soon avalaible at Otherland.