Happiness is a Hard Master

Talking about dystopias, it has always bothered me that Aldous Huxley’s Brave New World is mentioned in the same breath with books such as 1984, We, Fahrenheit 451 or R.U.R.
First off; I don’t want to undermine these other works. On the contrary,classical dystopian fiction is the main reason I started reading speculative fiction and no matter how old-fashioned, drenched or dated some may have come to be perceived nowadays, dystopian ideas and universes continue to fascinate me in full force.
It’s just that in my opinion Huxley goes beyond depicting a mere dystopia; there’s a very witty twist in Brave New World that distinguishes it from anything else I have read to date. I couldn’t put my finger on what it was, until I read Adam Roberts’ lines in his History of Science Fiction: “The greatest achievement of Brave New World is not portraying dystopia; it is portraying dystopia as utopia.” and I’ll take it from there.

When in the mid 90’s Therapy? sang “Happy people have no stories” they certainly weren’t thinking about Aldous Huxley’s Brave New World. This is the story of happy people. And ironically, it is a sad one.

Set in 632 After Ford (Henry Ford’s Model T was the first car to be mass produced), Brave New World depicts a society based on “COMMUNITY, IDENTITY, STABILITY”. People are genetically engineered, graded into castes and hatched instead of born. After their hatching they continue to be conditioned to be obedient, crafty consumers and sexual promiscuous citizens of the World State. They live healthy, happy lives. And if they happen to have a bad day there is always soma, the happy drug. This happiness and satisfaction is the basis for social stability. Suppression in the conventional sense is completely lacking here, since for the majority of people it is only logical that happiness is a good thing we all should aspire to. And so thought utopian writers until Huxley, who suggested “Well, maybe it’s not…” and confronted these two views.

Kim Stanley Robinson, author of the Mars trilogy, 2312, Aurora and the brand-new New York 2140, will be visiting Germany, with stops in Bremerhaven and Berlin! In co-operation with his German publisher Heyne and the Klimahaus Bremerhaven, we have organised two reading and discussion events. One will take place on Tuesday, March 28th, at 6.30pm in the Klimahaus Bremerhaven, the other will be on Thursday, March 30th at 8pm in Berlin at the Wasserturm Kreuzberg.

Read more »
Posted by Swanosaurus at 12:19 PM No comments:

The Day After Tomorrow...

Sitting under candle light at the Eselsbrücke’s bar in Prenzlauer Berg, I cracked open Uprooted by Naomi Novik for the first time. From the blurb on the back of the paperback, I knew that I was about to enter a fantasy world and follow the adventures of a young girl, Agnieszka: a world with dark woods and mysterious wizards. And that was about it. After the first few pages, I was deeply hooked and finished the book within a few days. I couldn’t put it down.

In this genre mashup, Novik successfully blends a combination of fairy tale, epic fantasy, and even touches of dark fantasy to weave a gripping narrative. Our charming main character, Agnieszka, is a young girl, coming of age and on a road of self-discovery. In a ritual that takes place every ten years, she is selected to be the serving girl of the Dragon – an enigmatic wizard who lives alone on the edge of the village in an ancient manse – and is forced to leave behind everything she has known. Very quickly, she discovers that she has abilities she never expected. Hearing that, your cliché radar might have immediately gone off. It’s true that there’s nothing new in the bullet points of this story, but it’s what Novik does with this familiar material that makes this book work.

In memory of Bill Paxton 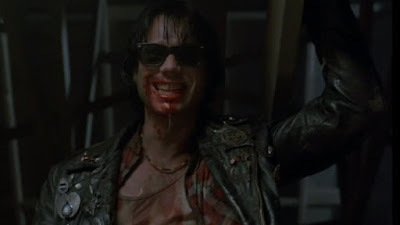 This is awful. I was trying to find a way to weasel out of writing my review on Freddy Krueger (that I have announced I would write next) and was considering alternatives. Not being able to decide, I mentally went back and forth between “An American Werewolf in London” and “Near Dark” for about a month. And now this… I wish it wasn’t this sad sad cause that forced me to come to a decision and Bill Paxton hadn't died. He was one of the greatests to me.

Watching or re-watching Kathryn Bigelow’s Near Dark (1987) is worth your time for many reasons: beautiful, poetic images, the very cool soundtrack, the wicked interplay of soundtrack and plot, amazing cinematography and a marvelous cast. Being probably the sole example of the cross-genre “vampire horror-western-road movie-family tale”, this film inspires nothing but awe in me. Now it’s not easy creating such an outstanding picture if you’re working in such an eccentric genre and with a plot that could at best be described as so-so, but Bigelow surely nails it!