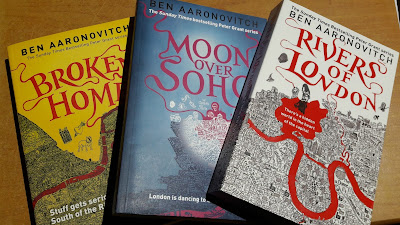 We are super happy to welcome the author of the quirky urban fantasy series "Rivers of London" featuring police officer and apprentice wizard Peter Grant!

The reading is this Tuesday, February 27th, at 8 pm, at the Wasserturm Kreuzberg (Kopischstraße 7, 10965 Berlin), admission is free as usual.

They're Creeping Up Amongst Us 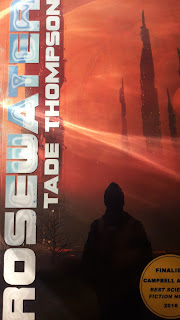 This review is long overdue. Tade Thompson's Rosewater got first nominated for the Campbell Award as best science fiction novel in 2016, then for the African speculative fiction awards, the Nommo Awards, in 2017 and deservedly won the latter. I have been contemplating Thompson's way up - got curious, got the book, read it, loved it, thought I ought to write something about it, and then, as life goes, forgot about it. A few months later the Meetup Berlin Science Fiction Book Club (no, not our Otherland Book Club, but a friendly fellow book club that I occasionally like to join) announced they would be reading it in February and if that wasn't enough signs from the "Universe" for me to write this review, everybody present at the discussion fancied it! Those of you who attend book clubs surely know what a difficult achievement that is. So here I am finally giving in to the universe!