Have you devoured this tremendous work of art yet? 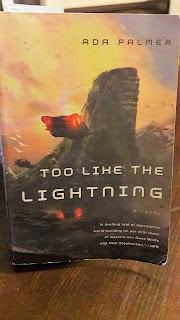 If yes - You may want to indulge in further material while preparing for our discussion.
For instance, take a look at these:

(Thank you Marc for the references!)
Posted by inci at 10:18 PM No comments:

Email ThisBlogThis!Share to TwitterShare to FacebookShare to Pinterest
Labels: Ada Palmer, Otherland Speculative Fiction Book Club, Too Like The Lightning

On Chainsaws and Massacres 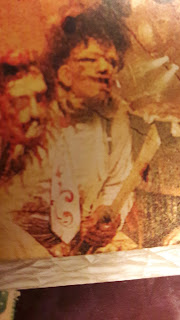 The recently deceased Tobe Hooper will without doubt be remembered firstly as the director of the staggeringly nasty, terrifying and one of the most difficult to watch horror classic The Texas Chainsaw Massacre (1974). In only an hour and a half he awoke the revolsion, agony, dread and deepest fears of a whole generation while bordering on hilarity and insanity through utmost exageration and bluntness, concluding in the deepest of reliefs. Didn't you too get uneasy at the gas station scene or shout in disbelief "Oh no, don't do that!" when they entered the crazy butcher family's house or cried in shock and firmly closed your eyes when Leatherface first appeared and grabbed Jerry, shutting the door - panicked and yet relieved because you didn't see what he's doing to him? And yet wasn't Leatherface's lipsticky face for special dinner occasions in the slightest sense somewhat cute? Did you laugh incredulously at that insane scene where the ancient Grandpa tried to suck Sally's blood out of her finger or tried to hit her on the head with the sledge hammer, missing repeatedly, leaving you repeatedly aghast? Hooper surely knew his craft.

There are arguably few other directors, even in the genre, who can grab you as tight as Hooper can. Above all, he contrives to confront his spectator with the major anxieties and fears of his time - something especially the horror genre can achieve in a uniquely metaphorical way. The coming oil crisis and the American fear of running out of gas, the mass murderer Ed Gein who made lampshades and seat covers from the skin of his victims (and whose legend was told to many baby boomers as children to keep them in order) and even his personal aversion against family gatherings... He takes all these elements and meshes them in an extreme way into a distinctive work. I would argue that Hooper's prime achievement was to create a true work of art that appealed and still appeals to the masses, despite initial rejection and banishment.