A Gloranthan Night at the Otherland! 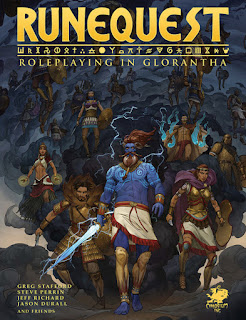 Otherland Bookshop is proud to host the release party for the brand-new edition of the role-playing classic RuneQuest: Roleplaying in Glorantha! We‘ll have the new edition‘s chief designers Jeff Richard and Jason Durall as guests, and a box or two of print copies of RuneQuest: Roleplaying in Glorantha and the accompanying Glorantha Sourcebook, published by Chaosium. This will be your first opportunity to get these in Germany. If all goes well, we will also have a few sets of the new RuneQuest dice sets, designed by Q-Workshop, available.

First released in 1978 by Chaosium, RuneQuest radically widened the scope not only of role-playing games, but also of fantasy world-building. Its setting Glorantha, created by Greg Stafford, owes much more to classic mythology than to the conventions of modern fantasy.

The release party takes place on August 11th, 2018 at 6.30 pm at the Otherland Bookshop. We look forward to seeing you there and chat about imaginary worlds, role-playing games and all kinds of Gloranthan goodness!

Posted by Swanosaurus at 3:49 PM No comments: 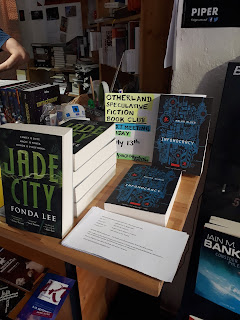 Ready for an extremely political discussion at our next meeting?
It is next week already: Friday, July 13th, 7.30 pm at the Otherland Bookshop. Admission is free as usual and there'll be drinks and snacks.

Infomocracy is a cyberpunk polit-thriller and the first book of Malka Older's "Centenal Cycle" as well as her debut novel.

The Locus Award finalist for Best First Novel is set in a world where the ever present "Information", a powerful search engine monopoly, has pioneered the switch from warring nation-states to global micro-democracy. The story revolves around the lives of three individuals in the wake of elections: Ken from the idealistic Policy1st party, the sceptic Domaine who works to overthrow the system and the Information operative Mishima.

Infomocracy has already propelled to the first place (together with Ben Aaronovitch's latest novella in the Peter Grant Series, The Furthest Station) on our top ten bestseller list! So I guess we are expecting lots of people, very excited about this!
Posted by inci at 3:53 PM No comments: