Romance of the Wasteland and the Call of the Ruins

Born in 1976, I was a child of the 80s, and when I was growing up, the Post-Apocalyptic genre found a lot of popularity in the shadow of the Cold War. We had the Mad Max films, Zelazny’s Damnation Alley, Interplay’s video game “Wasteland” which I played on my Commodore 64, the TSR roleplaying setting “Gamma World”, not to mention the hundreds of knock-offs and cash-grabs that tried to profit from the trend.

Patton Oswalt, in his book Zombie Spaceship Wasteland carves up the youthful Science-Fiction fandom into three types: each alienated from modern society and drawn to one of the three settings where the world has been destroyed or left behind. These types are: the Zombie who is enthralled with a scourge of undead; the Spaceship who is drawn to space opera and distant worlds; and the Wasteland. Here’s his description of the Wasteland:

Post-nuke, post–meteor strike, or simply a million years into the future—that’s the perfect environment for the Wasteland’s imagination to gallop through. The wasteland is inhabited by people or, for variety, mutants. At least mutants are outgrowths of humans. Mutants—the main inhabitants of postapocalyptic environments—are more familiar. Variations of the human species grown amok—isn’t that how some teenage outcasts already feel? Mutants bring comfort. You don’t have to figure out alien biology or exotic, inhuman cultures or religions. At the most, mutants will have weird mental powers or practice cannibalism. The heroes are unmutated humans, wandering across deserts (always, weirdly, wearing leather or tattered overcoats—suburban teens are accustomed to air-conditioning, so it’s not until they’re older that they learn the importance of fabrics that breathe) and carrying what they need. Wastelands are great at stocking belt pouches, backpacks, and pockets. At any time, Wastelands suspect they’re going to need to grab whatever’s at hand and head for the horizon.


No One gets out of Here Alive

Joanna Russ’s We Who Are About To... doesn’t fit into the category of light Science-Fiction narratives at all; instead of things blowing up, this work is heady and experimental. It’s a short, but fiery, piece about groups in a state of nature, the role of the dissenter in a majority, how quickly patriarchy reasserts itself as things revert to primal, a woman’s right to her own body, different religious concept, and more. It’s a thought experiment, really; and, as such, it ages well, being first published in 1976. It’s not about this technology, or that alien race, but rather about the characters put into Russ’s laboratory of the mind. Watching the thought experiment play out amongst the cast of characters gives us a certain view of human nature that is down right chilling, and provokes us into asking a lot of uncomfortable questions about ourselves and our species.
Read more »
Posted by inci at 11:52 PM No comments:

Email ThisBlogThis!Share to TwitterShare to FacebookShare to Pinterest
Labels: authors, Joanna Russ, Otherland Speculative Fiction Book Club, Science Fiction, We Who Are About To... 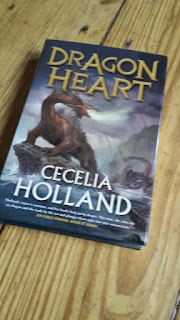 Second in my "books I've been meaning to review for several years but never got around to it" is this low fantasy novel, which I read back then for three reasons: 1, Kim Stanley Robinson has blurbeb it quite favourably, 2. it's a stand-alone with less than 300 pages, and 3., there's a massive sea-dragon radiating power on the cover.

Dragon Heart is about a castle by the sea that has been ruled by one royal line for times immemorial. Well, calling them a royal line might be slightly exaggerated, sine they don't seem to rule much more than three or four villages, one of them by the shore right at the foot of the castle. However, after the king has lost a decisive battle against the big empire ruling pretty much everything around him, Marioza, the queen of Castle Ocean, is forced into marrying the Emperor's brother and thereby wrap her small, backwards realm into the much more civilised empire. Of course, she and her family are not willing to give up that easily ...

Read more »
Posted by Swanosaurus at 4:06 PM No comments: 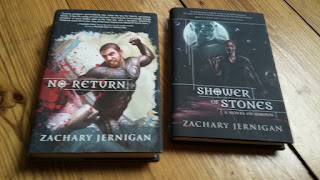 I've been meaning to write something about this book - an omnibus edition of Zachary Jernigan's two novels set on the world of Jeroun - for quite some time. I read both novels shortly after they came out, and I feel that they represent pretty much everything that I want from fantasy and often sorely miss; they have a breathtakingly original setting, characters that aren't reduced to their special skills, quips and some overarching mission, and they are tightly narrated and yet stilistically remarkable. While, in terms of genre, they could be called science fantasy, I think that would be doing them a disservice. The world they are set in is so organic that it feels wrong to describe this book as some kind of genre hybrid. It may sound redundant, but Jeroun really just is what it is; it has poisonous seas and alien, eye-less dragons; it has half-gods that have been poured from a jar; it has ghosts of the dead and decadent sorcerers who use alchemy to travel to space.

Read more »
Posted by Swanosaurus at 3:23 PM No comments:

Creeping Out With Creepshow!

“The most fun you'll ever have being scared” 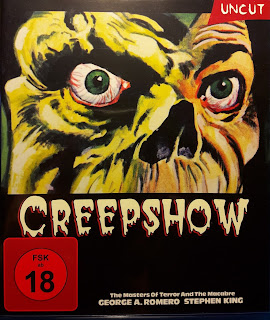 Romero is first and foremost known as the godfather of zombies. Even though I very much appreciate his Trilogy of the Dead and enjoy watching them every now and then, my favorite work of his is and always will be another one: Creepshow (1982).

This horror-comedy-anthology consists of five stories, of which two are based on short stories by Stephen King, who also wrote the whole movie and whose literary signature is hard to miss: revenge horror, the use of suspended metaphors, complicated/three dimensional characters... One of the interesting things about this movie though, is that it's almost at once recognizable as a work by King, but also, due to the imagery and to the way living dead are used, as a Romero movie. It's a perfect collaboration of two masters of their arts, really. And talking about masters of the art, it would be unfair not to mention the work of the great special effect and make-up artist Tom Savini here, who has worked with Romero on numerous projects such as Dawn of the Dead (1978) and Day of the Dead (1985).
Read more »
Posted by inci at 12:44 PM 4 comments:

What George Romero's original Zombie Trilogy means to me

Honoring George A. Romero's 77th Birtday, from the 4th of February on, we will publish some articles on the legendary writer/director.

I certainly didn’t get there first; but not last, either.
Until my mid-twenties, I firmly believed that zombie movies were too scary for me. I got a little confused when schoolmates started telling me that Dawn of the Dead (1978) was actually not a scary movie but a boring movie with lots of talking and little horror or action, but I still decided that the gory scenes would probably give me bad dreams. And what was the point anyway in watching boring movies that still gave you bad dreams?

Read more »
Posted by Swanosaurus at 12:07 PM No comments:


Today is the 77th birthday of George A. Romero!

One of the founders of modern horror cinema and best directors of our age, he showed us horror doesn't have to be a mindless scare, that it can be exigent, smart, political and still fun!

In order to pay our tribute to him, we make this a George Romero-Weekend and will be posting stuff about his work!

Happy birthday, Godfather of the Undead!

This Brief Music that is Good SF

İnci German on Last and First Men by Olaf Stapledon

If I had a typewriter, my wastebasket would be full of crumpled paper trying to review this book. How to describe the unparalleled, the ultimate science fiction?

Let's start with hard facts: Last and First Men: A story of the Near and Far Future was written in 1930 by the British philosopher Olaf Stapledon. Starting with an alternative present, Stapledon moves on to describe the history of eighteen different, fictional human races; civilizations rising and falling, species being born and modified as a result of genetic engineering or of planetary conditions and finally ending in the creation of a supermind.
Read more »
Posted by inci at 12:41 PM No comments: