I love science-fiction, and in the last years I’ve found myself increasingly drawn to hard science-fiction and near future stuff. And I’m apparently not the only one. The Martian was a huge hit, and Corey’s The Expanse has seen enough success to become a TV series. Star Trek is great! But the amount of hand waving to make that universe work has become increasingly problematic for me. “We should be there in 8 minutes, Captain.” Really? Where could you POSSIBLY be in space that you’re 8 minutes from anything, even given faster than light travel? Star Trek is constantly breaking the laws of physics as we understand them with a line or two of technobabble. Space exploration is really neat and exciting, but a lot of the very basic problems remain unexplored in far future science fiction. So, it’s refreshing to read a story that addresses these problems head on and asks the question, “what would a solution to this look like?” When I heard about Seveneves, I was immediately drawn to it: near future, hard SF that goes into specifics.

You might have realized that the little "stand" on the counter in Otherland has been empty for over a week now. That's because we have difficulties re-stocking Samuel R. Delany's Tales of Nevėrýon and we're really sorry about that. But some great people offered to lend us their own copies, so that you don't have to miss the discussion. So please ask us directly if you can borrow a copy and we'll provide you one!

"Michael, how can a billion Chinese people be wrong?"

We all have some movie that marked our childhood. A movie which, every time we watch it, makes us weirdly and cozily feel at our childhood home and in our childhood skin again. To me that movie is Joel Schumacher’s The Lost Boys (1987). As I hinted in the introduction to our Horror Re-watch series, I’m a huge fan.

Lost Boys is a kid-friendly horror comedy about vampires. As the title reveals, the original inspiration behind the story is in fact a child protagonist: Peter Pan. Who, much like a vampire, could fly and never grew old. Many people I’ve talked to hated this movie but more people I found on the net think it’s a freaking horror classic! Even though the plot is kind of weak and it surely doesn’t set an example in diversity, this movie is full of so many little awesome details that I'm going to write this review in two parts to fit in everything I want to talk about.
Also: In October DC Vertigo has finally published the comic The Lost Boys #1, a direct sequel to the film! It’s pretty hard to get hold of the comic in Germany though, so I thought I’d content myself with writing a recap until it is available. And so here we go:

After her divorce Lucy Emerson and her two sons Michael and Sam move to Santa Carla, California, back to her eccentric father’s home. What they don’t know is that Santa Carla is full of vampires who soon enough will get to them.
Read more »
Posted by inci at 2:29 PM No comments:


All Hail Jack Vance, My Life Would Suck Without You!


It has become a kind of tradition that once a year we try to publish an article in which we review, pay tribute to, praise or pray to Jack Vance in our newsletter (subscribe here). After the OBC on Friday, during yet another conversation on the greatness of Jack Vance, I shockingly realized that 2016 is almost over and we haven’t written anything about him yet! Unfortunately not enough time to write a new review that’s worthy of him, so I’ve decided to republish some of our previous reviews, including last year’s Jack Vance-Special. And as a special treat you’ll find great and funny quotes from The Tales of the Dying Earth at the bottom of the page. Enjoy! 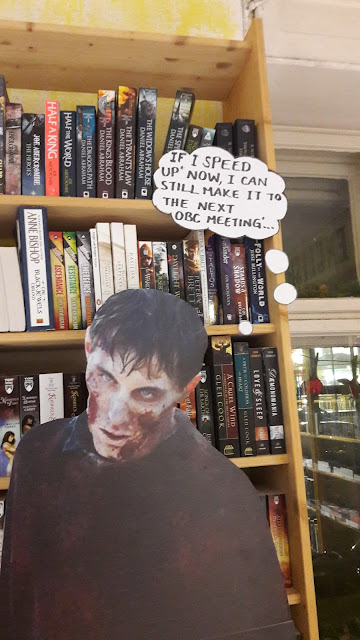 *    reading Seveneves by Neal Stephenson
**  Friday, November 11th (next week), at the Otherland Bookstore
Posted by inci at 9:00 PM No comments:

Being a bookseller, I tend to forget how wonderful it can be to read a book totally unprepared. By a stroke of luck, this is what happened to me quite recently with Frederik Pohl's Gateway. Knowing very little about this book – only that it was about humanity discovering the translight network of some ancient progenitor species and that Pohl had written collaborations with Frederick Kornbluth and Arthur C. Clarke – I kind of expected something about cosmic mysteries and the next step in human evolution. Something along the line of Clarke's 2001 or Childhood's End; in short, something I didn't feel the need to read because I know such stories pretty well by now.

Read more »
Posted by Swanosaurus at 2:47 PM No comments:

Her Smoke Rose Up Forever by James Tiptree Jr. 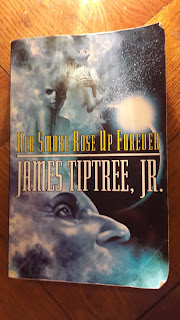 Reading James Tiptree Jr. for the OSF book club was an ambitious plan. Not only because we didn’t know how our discussion would work out with a collection of short stories, but also because few of us guessed what a strikingly challenging, intense and powerful reading experience it would be.


Well, discussing short stories worked out surprisingly well.
As to Tiptree Jr.’s prose, it’s safe to say that few authors manage to master the art as she does. You should be warned though, it’s not easy reading and her stories often require re-reading in order to grasp the full scope of what she does.
She can invent perfectly developed worlds/characters/settings even in the shortest of her stories and has the talent to use and bend language as she wishes – and her use of it is powerful, powerful, powerful!