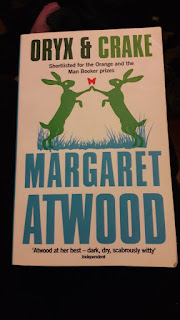 Oryx and Crake by Margaret Atwood


by Marc Beyer and Inci German

So we had our first meeting in August 2016 and it was great!
Kudos to all the people who dropped by to make an evening full of geeky discussions and smart fun possible.

We started with the dystopian novel Oryx and Crake by Margaret Atwood which is the first book of the MaddAddam-Trilogy before The Year of the Flood and the concluding Maddaddam.

The storyline switches between the post-apocalyptic present, told by the protagonist Snowman, and the past, narrated in a third person point of view.

Watch out for spoilers!


Snowman lives outdoors in a post catastrophic world, near a group of humanoid creatures that he calls the Crakers. He is in a fairly bad physical shape: nearly starving, drained, and damaged by the sun. Apparently the Crakers are not affected by these issues; they live on plants, they are sturdy and resistant to external factors. They are peaceful, gentle people and only have sexual intercourse during certain breeding seasons. They idolize Snowman as some sort of iconic figure and their teacher, and are in distant but constant touch with him.

Snowman used to be a boy called Jimmy who grew up in a privileged, gated community sort of establishment for employees of multinational corporations. In a world where genetic engineering of animals for human purposes is essential, Jimmy’s father works for HelthWyzer as a genographer. Shortly before his mother left the family to join some rebellious political group Jimmy meets the ingenious student Glenn whom he refers to as Crake, his nickname in the online game Extinctathon. They become friends and spend most of their time playing games, smoking weed and watching graphic underground videos.
The two boys are admitted to different colleges; Jimmy attends the more mediocre Martha Graham Academy while the brilliant Crake goes to the respected scientific Watson-Crick-Institute. Jimmy ends up writing ad copy and leading an unsatisfying life. Crake on the other hand becomes a bioengineer at RejoovenEsence where, under the cover of anthropological research, he creates the Crakers with a team of the most skilled players of Extinctathon.
He includes Jimmy in the team as a marketing specialist for a super important project; a pill called BlyssPluss that supposedly promises potency and health. It is in fact a secret bio-weapon which will have fatal effects.
At the Rejoov compound Jimmy recognizes a girl that he has seen in one of the underground videos when they were teens and on whom he had a crush. Crake introduces her as Oryx and explains that she is there for teaching the Crakers about nature and for her sexual services. Oryx has come from another, less privileged country where she was sold as a child to a gang of beggars, who then sold her to a ring fence of child pornography. Jimmy and Oryx start having an affair that is dominated by Jimmy’s fear of Crake finding out and his obsession with her seemingly tragic and secretive past.
The launching of BlyssPluss immediately sparks a pandemic leading to chaos and panic outside the protected Rejoov compound. Jimmy realizes that this has been planned by Crake and takes a gun to confront him. Crake and Oryx are returning to the compound and he asks Jimmy to open the door. Oryx is injured and unconscious, so Jimmy lets them in. Crake looks at Jimmy and says his last words "I'm counting on you" and slits Oryx's throat with a knife upon which Jimmy shoots and kills him.

Meanwhile Snowman decides to look for more supplies in the Rejoov compound and sets off on a journey that soon becomes dangerous not only due to his frail state but also because of intelligent altered animals and the rough climate. He injures his foot but still manages to get some supplies and returns to discover that three humans have camped nearby the Crakers’ habitat.
The book ends in the ambiguous situation where Snowman, uncertain whether the new humans are friendly or not, draws near their camp.

A large part of our conversation centered on the characters of Oryx and Jimmy (Crake, though titular and the main driver of the plot, seemed to be a less interesting person). As a result of the (very different) abuse and alienation they experience as children, Jimmy turns into an aimless loner, incapable of creating meaningful relationships with others, whereas Oryx develops a high emotional intelligence and adapts to whatever situation she finds herself in. We had a lively discussion about the agency of all three characters.

Regarding the book's well-developed setting, we mostly dwelt on the uber-capitalism that Atwood depicts in the shape of genetic exploitation of animals and children, as well as of the division of privileges in society leading to the formation of the described compounds versus the so-called pleeblands. These elements seemed to be prescient of the way the real world has been developing since the book's publication, and serve as a cautionary suggestion of “let's not do that”, similar to other dystopian fiction. We also discussed the amount of recreational drug use, the ubiquity of violence in online movies, the anachronistic nature of some apparently outdated elements described, and Atwood’s aim by choosing somewhat tacky neologisms.

We enjoyed reading and talking about this deeply sarcastic, dark but somewhat humorous book so much that we ultimately decided to give it full recommendation! It now is “OSFBC-approved”!
What an honor...

Our second meeting took place on September 9th, where we talked about All the Birds in the Sky by Charlie Jane Anders and next time (Friday, October 14th) we’ll discuss Her Smoke Rose Up Forever by James Tiptree Jr.
Posted by inci at 6:44 PM