The Zombie Novel You Never Knew You're Desperate to Read 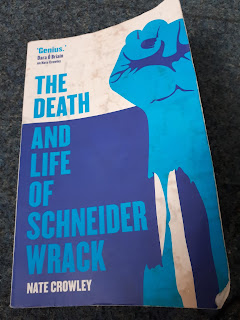 Nate Crowley will be visiting the Otherland on December 13th for a reading and QA event! Don't miss it!

This Friday we're breaking new ground with the “Otherland Speculative Fiction Book Club Horror Special”! We're not jumping in at the deep end by starting off with the heavy stuff though, like hardcore sadistic short stories or extreme horror that will give you nightmares. For starters we chose a horror comedy about a Zombie uprising; The Death and Life of Schneider Wrack by Nate Crowley. Exciting!

I didn't really know what to expect when we voted it, had never heard of Nate Crowley before and Zombies aren't exactly my kind of horror. But the premise sounded super interesting and the cover is very very cool (yes, sometimes I do judge a book by its cover). And yes, this book won me over at the drop of a hat.

True, this isn't your typical horror story that makes you piss your pants and leaves you all paranoid and shit scared for days after – but Crowley uses a traditional horror trope in an exceptionally creative way in order to tell a morbidly funny, fairly disgusting, partly horrifying, insanely absurd and yes, towards the end even surprisingly deep and heartwarming tale.

Spoilers from here on

Librarian Schneider Wrack comes to himself in a miserable state – blood and gut drenched, unwitting of what has happened to him, surrounded by monsters, enslaved on a trawler called Tavuto, where sea food for living people is produced in a very glibbery, squidgy, gross way.
It doesn't take him long to realize he's an undead but has somehow reclaimed his consciousness; he has woken up. It takes him a little longer, about a fourth of the book's length, to fully comprehend what is going on on this trawler. Each worker, zombie or not, is a convict and the worst of them have been punished by being executed, reanimated and forced to work under horrible circumstances.
With the help of his Zombie mate Mouana, he takes on the mission of waking up other zombies, start a revolution and avenge what has been done to them. To wake them up and create a bond between them, he needs to appeal to their memories and that's a hard piece of work, really. Being a zombie, your unfresh mind doesn't quite function the way it's supposed to be. But, as with all else, Wrack takes it with bittersweet humor.

“The dead laughed as he played the fool with his broken memory, but their faces hardened in solidarity as he reached the firmer, rawer memories. They cheered fiercely at the discovery of the pamphlets, they cheered at his branding, and at his father's helpless tears. And they cheered when he died. They cheered hardest when he died; they cheered for him, and he cheered for them. For a moment, the cheers made him brave enough for it not to matter. But then his story was over, and the cheers faded, and still he had no heartbeat.”

This alone is no easy task, but there's more trouble to come. In fact, there are few quiet moments in this book. The mess comes thick and fast: Zombies being used as bait while hunting an ET (huuuuuuge and frightening sea creatures); Zombies being betrayed by their overseers while trying to win them around; the discovery of Theutis, evil mastermind behind the ship's workings and sole survivor of an ancient species; Schneider BECOMING Theutis (and later even various sea creatures) in a bid to save the revolution; living revolutionaries joining in with the Zombies to put an end to extortion; the voyage to the Grand Amazon in pursuit of the legendary city High Sawarak where little amphibian humans live; the flight from Dust, Mouana's old general and one of the scariest antagonists in fiction history... The list goes on. But that's just one of the great things about this book. Crowley doesn't leave the plot at the Zombie revolution, which honestly would have been sufficiently brilliant. He further uses the premise as a background, or rather as a starting point for a story much greater, much more imaginative.

The utter absurdity and hilarity, so to say, which leaks from each and every page of this book is another highlight for me. Just take this extract where Wrack visits his old house unaware that it is now owned by other people:

“Schneider wanted to warn them of the devil behind them when he realised it was his own reflection in the hallway mirror.
The man waved his knife and the woman screamed. But all Wrack could do was laugh. Of course! He was a massive rotting stingray on mechanical spider legs! How had he forgotten that? He laughed and laughed, and the thing in the mirror shook with it, spraying black gore from its spiracles. What a thing to forget! Wrack wanted to double over, to shriek and giggle until he was sobbing for breath, but of course he had no lungs! Somehow, it made things even funnier. That poor baffled family, he thought, as they ran screaming to the front door. Woken in the night to find a monster in their house, getting confused by paintings.
Wrack reared with mirth as he stared at the mirror, and the ray laughed back. You had to see the funny side of things, he thought to himself as phantom tears began to pearl.”

Crowley's The Death and Life of Schneider Wrack is THE zombie novel you never knew you're desperate to read. It's a parade of submarine curiosities that will leave you astonished and highly entertained.

By the way, you might want to keep an eye on Nate Crowley. That guy has ingenious imagination written all over him and I hope/think we'll hear more of him. In his other known book, 100 Best Video Games (that never existed), which has received rave reviews, he “[takes] the reader on a lavish tour of the most memorable and groundbreaking games never made.” Wow. Seriously.
Posted by inci at 10:23 PM