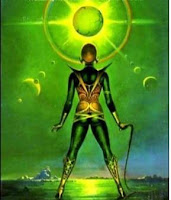 Frank Herbert's 1970 SF-novel featuring an agent of the infamous Bureau of Sabotage, a psychopath woman who plots a rather nonsensical plan to bring about the end of the world and an alien species who invented so-called jumpdoors that allow instant travel, is a very very interesting book, to say the least.
Meeting starts Friday, June 7th at 7.30 pm at the Otherland Bookshop as always. There will be snacks and drinks as always too.
See you there!

The Otherland Speculative Fiction Book Club meetings are always (not this month for some reason) on the second Friday of the month at 7.30 pm at the Otherland Bookstore.
There's always snacks and drinks that you don't have to pay for, contributions are welcome.
You never need to sign up to join us, but we appreciate it greatly that you do read the book if you're coming.